All pricing includes free shipping in the Continental US 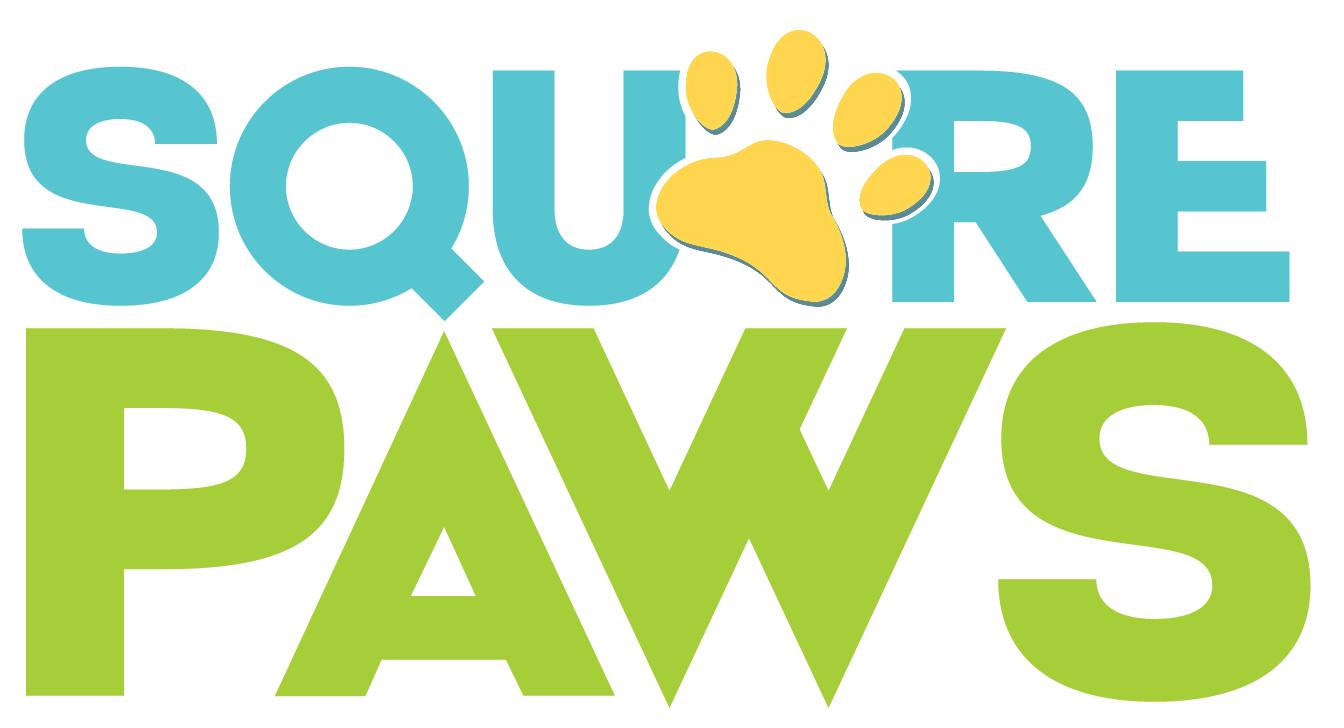 Traffic cross-state on Memorial Day weekend was a bear, so we missed the first fifteen minutes of the Amazing Acro-Cats show in Gulfport. My recent schedule had me traveling to New York and to South Florida for various projects at sudden times, so, when Samantha Martin contacted me on Facebook about their various show dates in Florida, I knew I might have trouble catching them in a location near me in Melbourne. The Gulf Coast on a holiday weekend seemed like a perfect mini-vacation, so off we went.

I had actually never met Samantha in person. Her booking agent, Polly, was someone whom I met at CatConLA in 2015. When Polly came to my booth and started to tell me that she worked with a “traveling circus-cat show,” a show in which the cats do all kinds of stunts and play instruments, I thought, “Toto, we’re not in Kansas anymore.” CatCon was and is a place for the crazy cat person to proudly wave their freak-flag unabashedly. After spending a year building custom art-towers for cats, I was still in denial that I was a member of this odd but very hip fringe culture of ailurophiles. But, throwing my lifelong cautious nature to the wind, I gave myself fully to this new world to which I unwittingly now belonged. 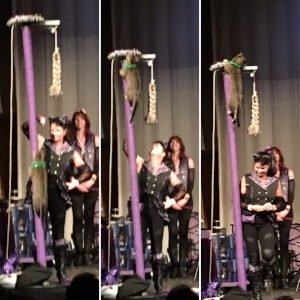 My contribution to the campaign gave me a chance to construct a tower concept I had designed but hadn’t yet realized: a musical instrument ensemble with plenty of spots for cats to nest in and sleep atop. I made three for the campaign, and they all went. The Acro-Cats met their goal, just in the nick of time, they had the downpayment for a new(ish) tour bus, and three of my MusiCat Towers were in homes throughout the US.

Spring, 2017, Samantha asks me on Facebook to share with my fans, friends, and family about their Florida dates because ticket sales are low. I do what I can, but most of my people are up north. So, I decide to see the show myself.

Suffice it to say, the Gulfport show was great fun! Pretty kitties jumping and climbing, and doing their thing, all at the direction of Samantha and her clicker, followed with a tasty cat-treat. Jumping through hoops and weaving through a slalom-type balance beam, there are cartoonish sound effects played on the sound-system that I couldn’t help but giggle at. Onstage, Samantha is flanked by two lovely assistants: Charmaine and Missy. All three of them are decked out in various black and purple-spangled outfits with black boots and brightly-colored cat-ear headbands.

"After spending a year building custom art-towers for cats, I was still in denial that I was a member of this odd but very hip fringe culture of ailurophiles."

The crowd at the show strikes me as very introverted and somewhat sullen. It’s dark in the theater, but I feel like there’s a social awkwardness to this audience. So many funny antics happening onstage, but I feel like I’m one of the only ones laughing out loud. But we cat people can be that way. Reclusive and shy by nature, we can sometimes seem aloof, just like the animals we hold so dear.

One of the “Tuna” cats, “Ahi Tuna,” I believe, (or was is Albacore Tuna?) persistently taps a button that lights up an applause sign. (The Tunas are the white protegee cats that have taken over the starring role of the recently deceased Tuna, Samantha’s first trained cat). I find myself clapping loudly to make up for the low energy from the crowd.

Another cat (Pudge or Jax, I think) comes out of her cage to perform, but, as Samantha explains, she’s sort of a loner cat who prefers to just sit on her “skull.” The skull Sam’s referring to is a skull-shaped sculpture that the cat jumps on and stares out at the crowd, totally on cue, doing nothing else but sitting there.

At the midpoint of the show, Samantha stages a bowling challenge between one of the Acro-Cats and a chicken she’s trained, whom she calls “Cluck Norris.” Charmaine and Missy set up the pins and the ball and the players take their spots. Cluck Norris was the clear winner at this show. 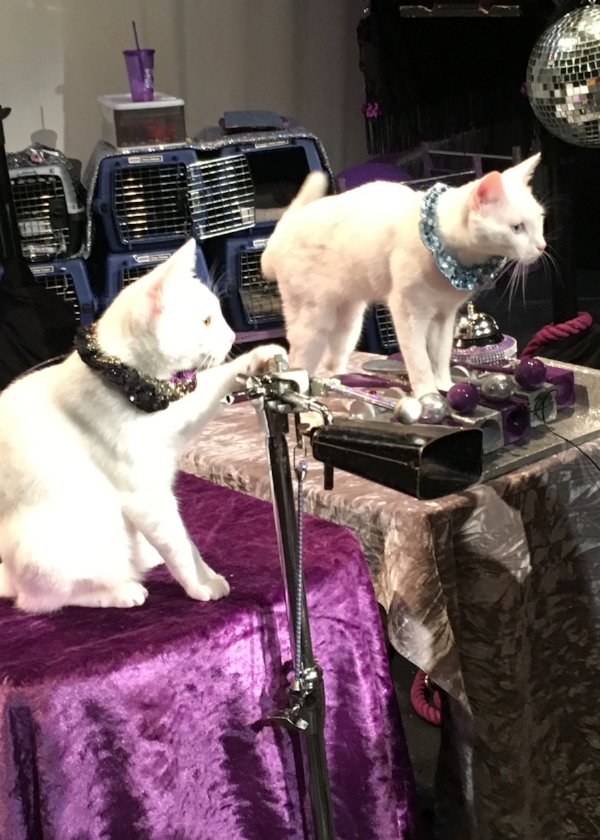 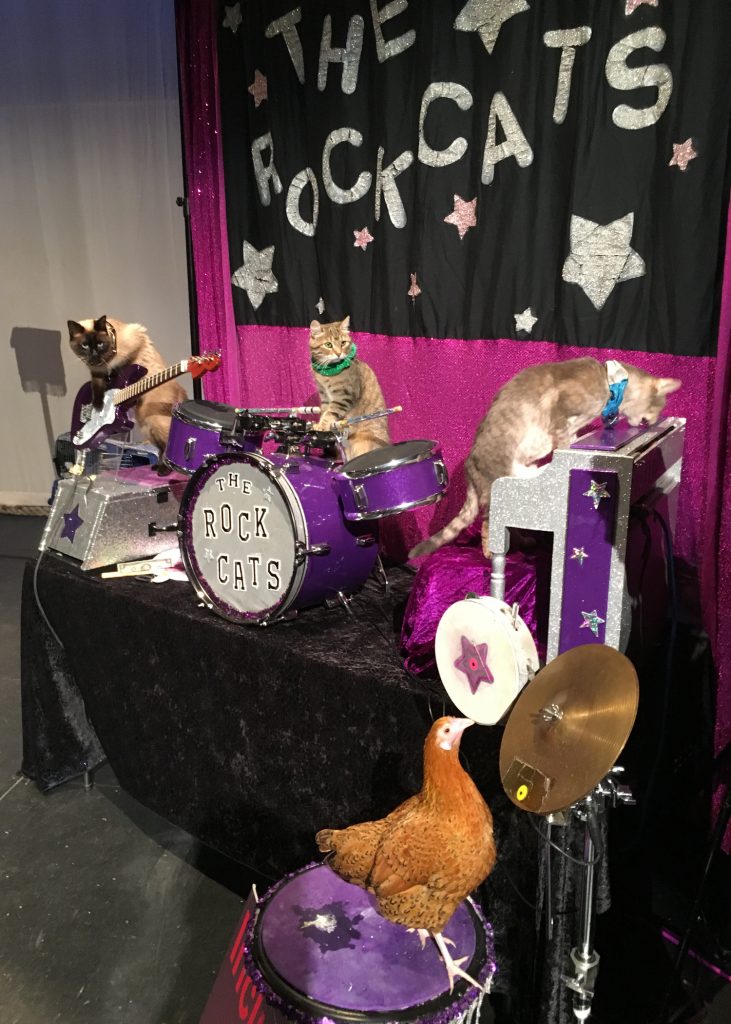 After some more acrobatic antics (including a cat clawing her way up an eight-foot high scratch post to pull down an “Applause” banner!), Samantha orchestrates a cacophany of epic proportions: the “Rock-Cats” band (guitar, drums and piano players) take their places on stage-right (including Cluck Norris on cymbal); the two Tuna’s playing the cowbell at center-stage; and Jax and Pudge performing on stage-left, one at a string of chimes and the other at a trumpet filled with cat food that plays jazz each time she pulls down to eat at the mouthpiece. Occasionally, you hear Christopher Walken say “I need more cowbell,” and the Tuna’s oblige. Samantha juts in, “Now for their second number, which sounds a lot like their first…” It’s all so absurd, I cannot help but laugh. It’s just noise, but glorious to behold nonetheless.

One week later, I’m wrapping up work on a MusiCat Tower for Charmaine. She said she had bid on one of them during the Kickstarter campaign but lost out, and now she really wanted to get one for her own four kitties back in Pennsylvania. She and I make tentative plans on how to get the tower to her. The Thursday night show in Orlando is canceled due to low ticket sales, so the entire crew treks out to Cocoa Beach on a rainy day to see the sights. I invite them all to dinner at my home. Charmaine says how it would be such a treat to get an actual home-cooked meal, something the crew of any traveling show would clearly cherish.

They show up in the Acro-Cats SUV complete with the larger-than-life sculpture of Tuna playing the bell on the roof. All my neighbors in our sprawling Florida suburbia slow down in their cars to wonder “what the heck is going on at that house?!?” 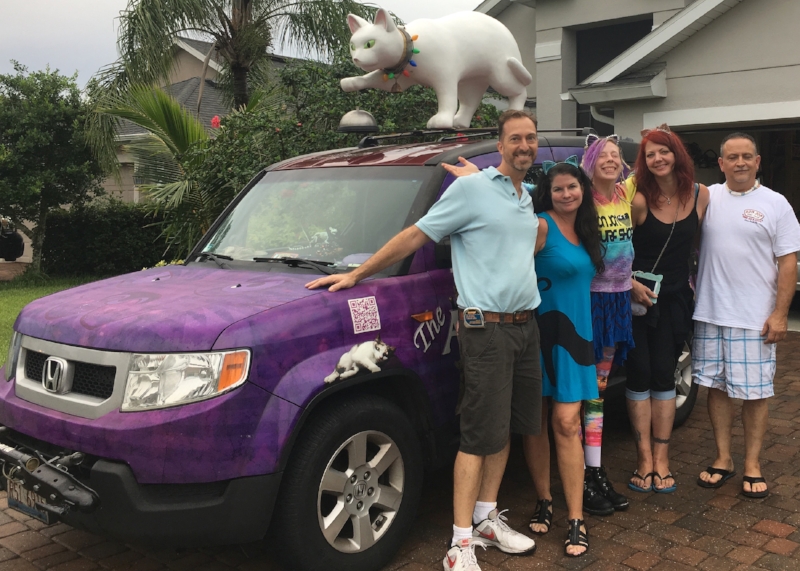 Charmaine, who is seemingly one-part drama club student and one-part bohemian hipster musician, loves the slightly unboxed views of her new MusiCat Tower. I let out a sigh of relief. I give the entire crew a tour of all the cat-tower prototypes throughout my home, and I’m humbled by their compliments and approval.

We all have a drink before dinner, and I get to know Dave, the show’s tour-bus driver and the sound and special-effects guy, Missy, whom I refer to as the “Quiet Beatle” of the group, and Debra and Ashley, two volunteers on the show whom Samantha is hoping will become tour staff. Samantha, Charmaine and Missy don their cat-ears the entire time I’m with them, and I feel like I’m living out a real-life episode of Josie and The Pussycats. Surely there’s a puzzling mystery somewhere near that needs us to solve it?

Chatting while we eat dinner, Samantha shares so much about her career, from how she started out doing this with rats she trained in her living room, to her recent move from Chicago to Georgia, to her disappointment in their performance on the Colbert Late Show, to being the butt of people’s jokes, to dealing with the stigma of being a “circus.”

I tell her that I saw the Late Show appearance as a great success. Yes, it wasn’t the on-cue cat performance like the one I had just seen in Gulfport, but the tension of the cats NOT performing not only gave Colbert a chance to do his comedic interjection in the performance, but it also gave such heightened drama to when the cats actually DID start to perform at the end of the segment.

As for the “circus,” that point resonates with me. One of the Square Paws fans on Facebook saw my post about the show and immediately voiced how “those cats are surely not happy performing on command like that.” I respect another person’s view of the circus, especially given that Ringling Brothers had just finished their final performance in the shadow of years of public pressure from activists (for an alternate point of view on this, click here.

But the love these folks have for these cats (and chicken) is totally palpable. Samantha, Missy and Charmaine actually refer to each one of the show-cats at dinner as if they’re real people.

And that’s not to mention the hundreds of cats that the Acro-Cats have found good homes for. At every show, they have kittens and foster cats available for adoption. Some Samantha has come by along her show travels, and others through the network of cat-people she meets. No circus cares for their animals like Samantha and her crew. And I don’t think I would have gotten that perspective had I not invited them to dinner. 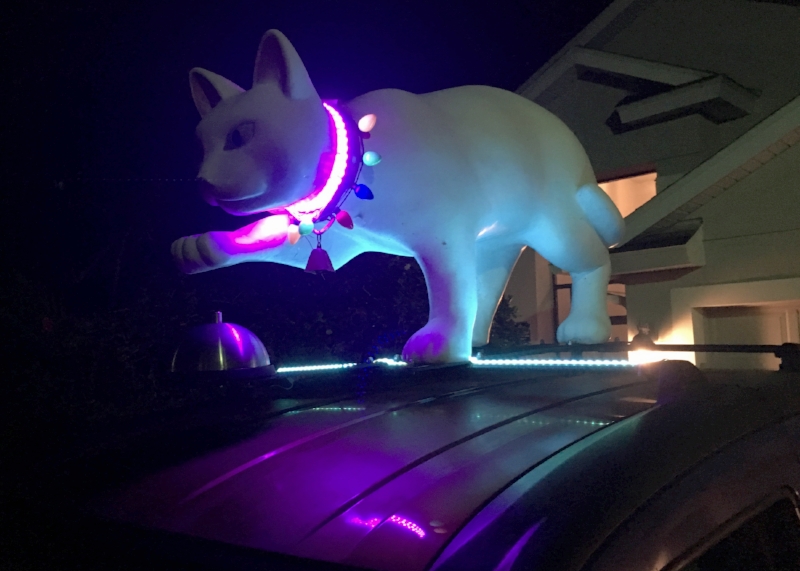 Dinner ends and they hop in the SUV with the rooftop Tuna now lit up for their drive back to Orlando. I tell Samantha that maybe they should start a new show tradition: being hosted by one of their fans for a local, home-cooked meal in the various towns they visit. It’s a good reminder of that idea that all living beings are only six steps or less away from each other. A delightful night with a good group of people!

I wave goodbye, head inside and give my cats extra snuggles.

Be the first to know